Thanksgiving For The Impossible

The word “Thanksgiving” brings to mind visions of tables decorated with festive fall colors, and family gatherings filled with love, laughter, picture-taking and reminiscing about by gone days. Sometimes, there is a new baby in our midst, a new love that has blossomed, a new home purchased, or a milestone reached. Sometimes, memories are shared of struggles fought, or the loss of a loved one. Each November seems to mark another year that has shaped our lives in some distinct way. I remember back to such a “time of shaping," and an unforgettable Thanksgiving Day.

It began in September of 1978. After an easy pregnancy, but difficult forceps delivery, our son was born. I was eager to be a mom and quite thankful for this little life in my arms. My husband, Mark, and I had planned on natural childbirth, including soft music and lights in the delivery room, warm water for the baby after delivery, and immediate bonding with breast-feeding; but major problems disrupted our plans. Our son was presenting himself face up. In those days, a mother-to-be had to hope the infant would turn over on his own while she lay there connected to contraptions resembling TV’s with bad reception.. In all the chaos of the emergency, the lights went on, and the basin of water was pushed aside. As the music stopped, my husband was kicked out of the room.

The doctor hastily administered a spinal injection, and then proceeded to pull Jason into the world. When Jason was placed in my arms, I noticed the scratches on his forehead. I recall thinking that he was a tough little guy, having survived the squeezing of those metal prongs. Two months passed as Mark and I relished the experience of parenting. Thanksgiving was fast approaching, and we looked forward to our first holiday with our baby.

As I breast-fed Jason on November 20, I began to develop a headache. Within hours, I was in extreme pain and found it difficult to bend my neck. By the time Mark came home from work, I was in dire straits. When my fever reached 105º, Mark decided to take me to the ER. Some friends agreed to care for Jason, and reluctantly, I kissed his little face goodbye and promised him I’d be home soon.

On the way to the hospital, every bump in the road sent pain radiating throughout my back. Once in the emergency room, I explained to the doctor that I was lactating. I requested something for the pain, so I could return to my nursing baby. The doctor didn’t answer. After examining me, he left the room to speak to Mark, privately. In my delirium, I could pick out words like, “contagious,” “specialists,” and “life threatening,” Mark’s voice sounded anxious, as he responded with questions. Returning to my side, the doctor announced that I would not be going home - that I must be admitted to isolation, as I had contracted spinal meningitis. “Menewhat?” I retorted, weakly. “How?”

“We don’t know how, and we’re not sure if it’s bacterial or viral, so precautions are necessary,” the doctor responded. “We’ll administer antibiotics immediately.”

Reeling from the pain, my maternal instincts wouldn’t accept that I’d be separated from my baby. “Who was going to care for Mark and Jason?” I pleaded. I needed to go home, but it was useless to argue as my fever was rising.

Visitors to my isolation room had to don gowns and masks. Friends called to encourage me; but I was so high on pain killers that I never remembered our conversations. Each time the drugs wore off, I requested a breast pump to keep my milk flowing, for my return home to my baby. Mark had to work, so family members pitched in to help care for Jason. He was slowly getting accustomed to a bottle, but he cried a lot.

The spinal taps were extremely painful, but necessary as the doctors tracked my progress. Once the doctors determined that the disease was viral, the antibiotics were discontinued, being ineffective against a virus.
They told me that my body had to fight the illness on its own now.
When Thanksgiving Day arrived, my family gathered at the home of my in-laws. As they shared the prepared meal of turkey with all the trimmings, I lay in my hospital bed, feeling the meningitis eat away at my substance. As the disease attacked my brain’s left side, muscles in my right leg began to spasm and atrophy. I prayed repeatedly for healing and hope. I yearned to hold my sweet baby boy.

Suddenly, I noticed something outside my hospital window. I focused more intently, and tears formed in my eyes. Outside the pane of glass, my husband, his sister, and his Mom were holding up Jason for me to see. My two-month old son peered through the glass that separated us, and our eyes locked. Determination and faith rose in my heart. Thankfulness grew as I smiled back at my child. I knew I would return home soon!

On the 11th day of my hospital stay, another spinal tap was performed. My right leg had diminished to half its normal size, but to my doctor’s surprise, I was 70% improved and could be released. Mark took Jason and me to my brother’s home, so his wife, Sandy, could help me with the baby. I tried to nurse Jason, but I was no longer lactating. I had been feeding him the day I went to the hospital; therefore, I worried daily whether or not he might contract the meningitis. Miraculously, he did not.

I’ll never forget the nurse’s words to me on my follow up visit to the doctor. With pain in her voice, she told me of her husband, who had contracted meningitis. He had not been as blessed as I was - he had been left paralyzed. I was speechless, but gratitude filled my heart for God’s mercy upon me. My doctor agreed that I was extremely fortunate, yet the prognosis was that I would never walk without a limp. I looked at him exclaiming, “I have a little boy and I’m going to run with him. I WILL recover!” I was 24, and the doctors had given up on me, but God had not. My faith increased daily, as Mark and I began our own regime of physical therapy. I could not step out of the tub without falling, or hold my baby unless I was sitting down; but I kept hearing that old song, “ooh child, things are gonna get easier, ooh child, things’ll get brighter.”

It took a year and a half to reach the goal God had put in my heart. I regained full use of my right leg. Although the tests showed severe nerve damage to my thigh and outer calf, my leg returned to the size it was prior to my illness. The strength in my muscles magnified. By the time Jason turned two, I not only walked without a limp, but I ran. Soon, I was teaching an aerobics class and even won a dance contest!

With a heart filled with gratitude, I will always remember that Thanksgiving Day. The world told me I was done, but through the eyes of my child, God told me I had won. Today, no one would ever know that I fought such a difficult battle, one November, so long ago. There are no signs to show the world, except my own heartfelt words of thanksgiving for the impossible. 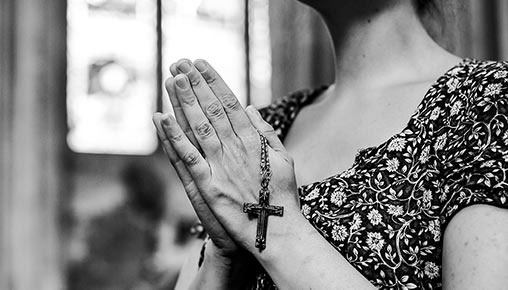 Submit your prayer request. Thousands of caring people will see it and pray for you.